A Swift Response To: 28 Weeks Later 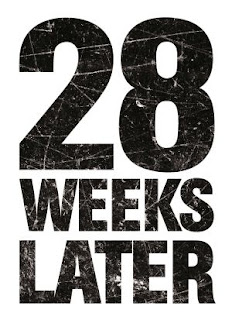 Let me begin by saying that the 28 franchise has one of the single best soundtracks I have heard. it is emotive, exciting, adrenaline pumping. If sex was a soundtrack it would be this, though there’d probably be a premium to hire John Murphy to orchestrate that. Regardless, I was thrilled by it in the original and pleased to see its return in 28 Weeks Later. The music accompanies the story of Don (Robert Carlyle) who has survived the outbreak of 28 Days and now, six months later, is joined by his children (Imogen Poots and Mackintosh Muggleton) in an effort to begin rebuilding London. But, it transpires, Don’s past and future is not as stable as presumed. Robert Carlyle performs superbly as a guilt stricken and regret ridden husband, father and zombie apocalypse survivor. His attitude and appearance seems in part to have been molded on the characteristics of Gaz from The Full Monty, which makes Don’s tough choices and flaws of character relatable and interesting. However, it must be said that character changes towards the end of the film, though vital to the plot, seemed a waste of Carlyle’s talent.

However, at the same time it is a joy to see Jeremy Renner and Rose Byrne take the reins as protagonists Doyle and Scarlet. They bring an energy and humanity to what could have easily been stock military characters. With regards to this, compliments must be extended to Rowan Joffe and Juan Carlos Fresnadillo for producing a script of empathy and sacrifice. This praise cannot, unfortunately, be applied to Poots and Muggleton with the same consistency. The children’s scenes at times feel hackneyed and scrappy. For example, at a significant point of tension, Tammy cries “We stick together no matter what,” adding to the scene what ‘Confessions of a Shopaholic ‘ added to the entertainment industry. Nothing of value.
As far as graphics are concerned, 28 weeks later makes ample use of them without focusing solely on CGI. To be honest, there’s not a huge amount of groundbreaking to be done when it comes to zombie movies, so in short the film fulfills the requirement for quality of graphic content that we have come to expect in apocalypse movies; nothing more, nothing less.
4/5
Review