The tower was built by Taylor Woodrow Anglian using Large Panel System building, in which concrete prefabricated sections are casted off-site and then bolted together during construction. Though Geoffrey Davis, managing director of the company, denied this technique was responsible for the collapse, subsequent changes to legislation suggest experts and lawmakers believed otherwise. In 1970 an amendment to the Building Regulations Act stated that high rise buildings must be constructed so as to withstand major trauma, such as an explosion or fire, without collapsing.

Just over 50 years later, a faulty TV set in motion a blaze that would kill six and injure twenty at another tower block, Lakanal House, in Camberwell, South-East London. An inquest led by Judge Frances Kirkham found three main issues that either caused or exacerbated the damage done. Firstly, there were no sprinkler systems installed. Secondly, the London Fire Brigade had maintained a fire compartmentalisation policy of “stay put,” in which they advised residents to remain in their flats. Unbeknown to emergency operators, the block hadn’t been built and maintained correctly which meant the fire was able to reach the residents much faster than it should have, rendering their guidelines ineffective. All those that heeded the Fire Brigades instructions perished.

This brings us to the third factor: external cladding. Lakanal House had recently undergone a £3.5m refurbishment that saw the fitting of less fire resistant cladding panels to the exterior of the building than the ones they were replacing. Transcripts from 999 calls that day show that this contributed to the fire spreading both up and down simultaneously; something emergency operators initially refused to believe. This fatal oversight by the owners of the block, Southwark Council, resulted in a fine of £570,000. 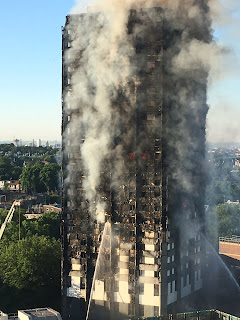 Frances Kirkham recommended to Southwark, the London Fire Brigade and the then Communities Secretary Eric Pickles that sprinklers be fitted in all high rise tower blocks, that the ‘stay put’ policy be clarified and that industry oversight be strengthened, with respect particularly to the issue of flammable cladding.

Yet in the early hours of the 14th June 2017, there came a horrifying revelation that this time lessons had not been learned. Grenfell tower, home to 120 families, ignited. The details are as of yet unclear, but police reports suggest the initial cause of the fire was a faulty Hotpoint fridge-freezer. The problem is that none of these alone could possibly have turned an entire 24 story building into a husk. How is it that a localised fault has left 79 people confirmed or presumed dead and counting?

It is because Kirkham’s advice fell on deaf ears. According to Ronnie King, Honorary Administrative Secretary of the All Party Parliamentary Group Fire Safety and Rescue Group, there has never been a proper review of the Lakanal House report, completed in 2013. The decision as to whether sprinklers were appropriate was left to councils and landlords on a case by case basis. Consequently, 4000 tower blocks remain without sprinkler systems, including Grenfell Tower. Mr King told LBC that Gavin Barwell, Housing Minister until he lost his seat in this year’s snap election, told him this year that he was still considering the report’s proposals despite them being four years old.

Advice on industry oversight saw a similar fate to Kirkham’s sprinkler recommendations. In Germany any tower block above twenty-two metres, the full reach of a fire engines ladders, must have flame-resistant cladding. In America this is fifteen metres, but in the UK there is no regulation despite the Fire Protection Association pushing for a statute. UK restrictions only apply to new buildings that are over 30 metres high; and even then they only require the outer layer of the cladding to be fire-proof, not the inner core. This directly contributed to the spread of the blaze at Grenfell tower. 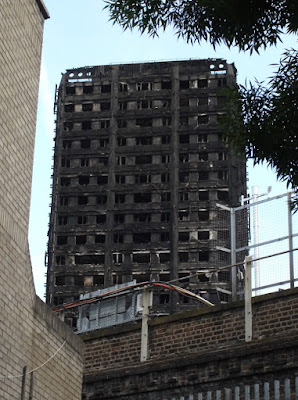 In 2016, a £10m refurbishment was finished on the building. This included a glazed curtain wall façade, insulated exterior cladding and rain screen cladding. Harley Facades, a subcontractor for Rydon Maintenance who is the lead contractor working for KCTMO (the owner of Grenfell tower since 1990), asked their supplier Omnis Exteriors to provide them with Reynobond PE cladding not Reynobond FR cladding. Reynobond FR cladding is fire resistant, whereas Reynobond PE cladding is not. It consists of a flammable polyethylene core behind aluminium composite panels: a very similar build to the cladding implicated in Lakanal House in 2009 but also in The Lacrosse building fire in Melbourne 2014, the Tamwheel Tower blaze in Dubai 2012 and the fire at The Address Hotel in Dubai in 2015. Dr Angus Law of the BRE centre for Fire Safety Engineering at the University of Edinburgh suggests this external cladding “significantly contributed to the spread of fire.”

What possessed the contractors to choose this cladding? Perhaps it is the fact that Reynobond PE is £2 cheaper per square metre than Reynobond FR. The perverse irony is that Reynobond is manufactured in Georgia, USA. Effectively, so little was learnt from the Lakanal House tragedy that we still allow British contractors working on tower blocks to import materials that do not even meet safety requirements for high rise buildings in the nation they are manufactured.

Just like in Lakanal House, incompetent maintenance of Grenfell tower rendered the London Fire Brigade’s ‘stay put’ advice useless. According to one resident, it took roughly an hour for the blaze to jump from one half of the building to the other. If Grenfell had not been cladded inappropriately the fire would never have reached that side of the building in the first place. But because it was, some residents who could have saved themselves tragically lost their lives after following advice to stay indoors.

In a heart wrenching video posted online, one protestor and bereaved resident cries “why, why, why?” This is the question that remains. Why was this allowed to happen? 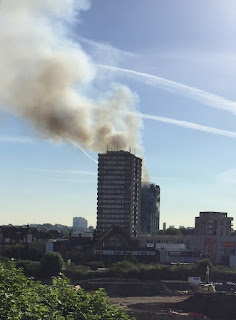 Grenfell tower serves as an example of the harrowing human costs of the wealth divide. In an area in which million pound residences lie dormant the working class are, in the words of one resident, “pigeon holed” into unsafe and often uninhabitable spaces. Jeremy Corbyn called for empty mansions to temporarily house some of the victims. Whilst perhaps impractical, this does draw attention to the striking juxtaposition of the poor and the rich in Kensington and elsewhere. As Akala implies in an interview on the BBC, this event was much less likely to occur in the homes of the super-rich who can afford up-to-date safety features such as sprinklers. This raises the question of safety for sale.

Some of the residents of Grenfell tend to agree. It is because of their socio-economic status, they argue, that complaints about fire safety backdating to 2012 were ignored. Councillor Judith Blakeman corroborates that she alone raised 19 complaints on behalf of the residence of Grenfell, the majority of which regarded fire safety. The residents association, the Grenfell Action Group, foresaw the event. Following fears of fires after a series of power surges in 2013 and further disturbances in 2016, the group posted in November last year that “only an incident that results in serious loss of life” would end the “dangerous living conditions” at Grenfell.

The cladding itself is perhaps a symbol of inequality in the UK. It was fitted to improve the external aesthetics of the building. Those that are exposed to its aesthetics are only secondarily the residents themselves. Primarily, it affects the well-off in the surrounding area that look upon Grenfell. The refurbishment was, bar the creation of a nursery and boxing club, a superficial improvement in the interests of wealthier members of Kensington at the expense of the poorer.

It is vital that we learn immediate lessons from this event. Lawmakers must look upon Grenfell as their fathers did upon Ronan point. The market has failed to provide safety and so it is up to the state to enforce stricter regulations to prevent this from happening again. To fail to do so would not simply be oversight, it would be, in this author’s opinion, murder.

Simultaneously, we must address the issue that lies beyond the immediate practicalities: inequality. One might accuse me of politicising an issue of human loss. But it is for this very reason that we cannot afford to depoliticise it. We cannot allow this tragedy to be naturalised as some freak accident. We cannot legitimise this as only an error. This is inherently political because it must be prevented from happening again and because it represents for the protestors and residents at Glenfell a longer-term injustice. An injustice of wealth distribution in which safety and habitability must be bought. It is not just time to revisit the Building Regulations Act, but the principles on which our society is built.