A Swift Response To: Django Unchained 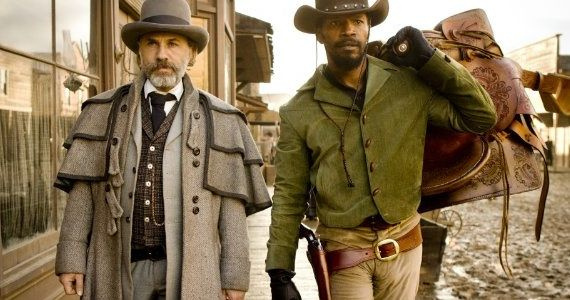 Three years since his last film, director Quentin Tarantino returns, living up to the expectations set by Inglorious Basterds and classics such as Pulp Fiction and Kill Bill.Some familiar faces are to be seen, with Samuel L. Jackson ditching his afro for the balding head of a racist black southerner, and Christoph Waltz replacing his Lugar with the rifle of an endearing German bounty hunter. Joined by Jamie Foxx as Django, Waltz delivers Tarantino’s wit throughout the film with the coolness of, well, a pro-civil rights German bounty hunter. Equally, Foxx steps into his own as his accomplice, and together the duo progress from a commercial to heartfelt relationship, evoking genuine sadness at Dr. Schultz’ death. Leonardo DiCaprio’s antagonist Calvin Candie, the owner of a slave run plantation, is fantastically written and delivered. He is the epitome of narcissism, self-indulgence and charismatic racism, the personification of a more honest Fox News, one might say.

As with most, if not all, Tarantino movies, expect blood. Lots of blood. Within 5 minutes 2 slave owners and a horse are dead, and by the closing act the walls are redder than Gordon Ramsey after a hot shower of ketchup and rage. Exciting? Yes, excessive? Maybe, but however squeamish an audience the deaths serve purpose and occur in the inventive style of Tarantino. Similarly, the use of music, lighting and colour are idiosyncratic of Pulp Fiction and Kill Bill. In one particular scene, Foxx stands in a vibrant blue suit against a backdrop of willow trees on a ground littered with autumn leaves, a point at which I actually paused the film in order to admire the contrast.

One disappointment of the film, however, was that with a star-studded cast of male actors there was little room given to Kerry Washington, or any female characters for that matter. Sure, Broomhilda’s predicament evokes pity and Washington performs well, but at times the film toes the line between nuanced exploration of 19th century race relations and clichéd knight-in-shining-armour saving his damsel in distress. Yet despite this, Django Unchained cannot be boiled down to a hackneyed rescue-romance, as it is an entertaining yet powerful condemnation of slavery, satisfied with Tarantino’s typical deliverance of thirsty revenge.